Mozarteum Brasileiro: The Junge Philharmonie Wien will present a very special program in Brazil. Why did you choose Strauss, Alban Berg and Gustav Mahler?
ML: When thinking about to come to Brazil my first intention was to present music based in Vienna which was and is important even for our musical life of today, in Europe as well as all over the world. So Mahler opened the door to the 20th century.

Based on Mahler’s 4th symphony I considered Berg as very close to him but going on one or two steps further on. So we will do this concert in an unusual way: beginning with an Ouverture from Johann Strauss – who was in contact, too, with Mahler in Vienna ! – the Waltz goes through all of the three pieces: Berg used it as well as Mahler. The Berg Violinconcert was Berg’s last work and he was aware of his farewell from this world. And Mahler tells us that death is not the end of all existing: there is another world, another dimension we will change to. So this concert will end up with a little view what will come afterwards. 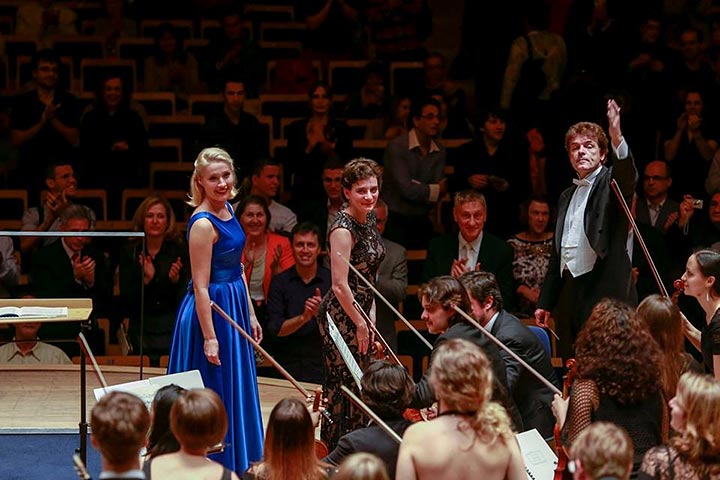 Would you please explain each piece and what is the most striking in each of them?

Right at the beginning – with this opening bells –  Mahler calls us to consider our own life throughout a mirror in a way, maybe not to consider everything real and serious. The first movement describes the entering to the world “as it exists” in a very simple way with eyes wide-up opened, like a child. Then follows a movement which is a dance of death: in the middle-age there was this fine idea that death – as a person with a violin with strange sound – is a friend of us and is present right in the middle of our daily life. Only with his escort we can reach heaven. Third movement: “there is a catholic mood upon it like in old cathedrals with their tombs.” There come up reminiscences about our life and suddenly, only for one moment, heaven is opening. The symphony ends with a kind of “Lied” which describes life in heaven as it may be, considered by a child. There are again middle-age based poetic visions about heaven and Mahler chose a text of a collection of songs which he liked very much. Let’s see what will be the most alluring part to the public – perhaps the 3rd movement.

Please, let us know as well of the importance of Mahler in the repertoire of  The Junge Philharmonie Wien’s repertoire.

It became soon very important: in 2002 we played the 4th many times, then the 2nd.  In 2012 we started a Mahler-cycle, beginning with the 5th, now comes the 4th, next year we are going on with the 3rd, then 2nd and finishing with the 10th.

How do we characterize The Junge Philharmonie Wien’s repertoire?

I always intended a very broad repertoire going on from the classic to modern music, jazz,  symphony as well as opera and very important accompanying soloist, singers and instrumentalists. When starting this orchestra in 1997 we gave us a motto: Opening dimensions – and I have to say we still are going on like this every year. In 2015 we played Tschaikowsky’s 1st symphony and Piano-concert, Ravel’s La Valse, Schubert’s The Great, Wagner, Debussy and Luis Ochoa – besides Mahler and Berg.

Would you please tell us about the Viennese musical tradition?

Vienna was over a hundreds of years the capital of a large, large country in Europe. First climax in the times of Mozart, Beethoven, Haydn. Besides the emperor’s court in 19th century developed a musical life of citizens, first in their homes (Schubert), afterwards in concert halls (Vienna Musikverein). So there was money, there were commissions and there were many different people from different countries together in Vienna: Hungary, Bohemian, German, Jewish. And there was a steady going on tradition of playing music, composing beginning from Haydn, Mozart, Schubert, Brahms, Bruckner, Mahler, Schoenberg – they were all living in Vienna and learning from each other, hearing the music of the other composers without any interruption – almost unique in Europe.

What are the main proposals of this orchestra?

Presenting classical music in a modern and fresh way and with the energy of young people.

Why is it important to establish and maintain youth orchestras?

There is great heritage that should be given to further generations, and playing this music makes you feel happy in a very deep and satisfied way. And young people want to stay and to play together and not to practice only in their home-rooms…

In its nearly 20 years of activity, what has The Junge Philharmonie Wien won of the utmost importance?

Two trips to China, concerts at Vienna Musikverein and doing a really large repertoire: thinking e.g. in 2013 playing pieces from all operas of Wagner.

What is a source of pride to you regarding this youth orchestra?

The lovely faces of the young people

.What does The Junge Philharmonie Wien offer that is special to the public in general?

A great joy of playing music, well educated in the Viennese style.

You are a musician with an extraordinary background. What propelled you to the music world?

First of all both my parents are musicians. When I remember my childhood the only important thing at home was music. My father gave me the first chances to conduct an orchestra after I had experiences in singing in a choir and of course playing piano. But it was not clear that I’d become a musician.

Your experience with Claudio Abbado at The Vienna State Opera was crucial to your career? Please tell us about your most important experiences.

When I saw him for the first time at Vienna State Opera it was a completely new sound and world of music for me: we must consider that about 30 years ago in Vienna classical music was a matter of severe professors sitting on a throne who only themselves know how the music has to be played. In this mood I grew up. My teacher at University of music planted his fist on the table…

Claudio was completely different to this statement: music can develop at its best only starting from a very relaxed point, he collected young students around him during the productions who could follow him in every detail without any distance. So my deepest impressions were Mozart’s Figaro, Debussy’s Pelléas, Mussorgski’s Chowantschina, Schoenberg’s Gurre-Lieder and later on all Mahler symphonies I heard him conducting.

For me it is a way of expressing and living different kinds of emotions. Music lets me go through many, many different sides of life. We are going on to develop ourselves more and more, isn’t it so? That could be the sense of life.

For mankind it is one of the most important things: we can develop our souls with music, this is a language that everyone understands and I am totally convinced that after hearing music we all feel better, so more music in the world less wars. It is a gift right from God. 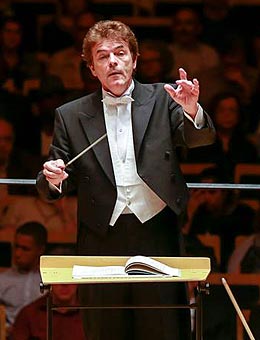